Can you become a “Kid Whisperer”?

I was in Walmart the other day and this kid, probably about 12, was making farting noises by putting the palm of his hand up to his mouth.  He was happily making these sounds as he followed his mother up and down the aisles.   She told him to stop it several times.  Suddenly she turned around and yelled “I said stop!  Why do you keep making those noises!?”  He gave the classic “I don’t know” answer and about 5 minutes later, he started it again.  The mother never did understand what made her son want to make annoying noises – at least not that day.

You’ve probably heard of Cesar Milan, “The Dog Whisperer.”  He has an uncanny ability to get the most oppositional and disobedient dogs to become well behaved and likable.  The reason he is able to change canine behavior so well is that he understands dogs.  He knows what makes them tic; what motivates them and what doesn’t.   Whether you like the Dog Whisperer or not, that’s the premise that made his show so popular.  People wanted to get inside their dog’s head and, by understanding their pet better, become better and less stressed dog-owners.

Wouldn’t it be great to have what seems like a magical ability to get dogs to do what wanted?  Wouldn’t it be even better, as a parent, to have that ability with your children? 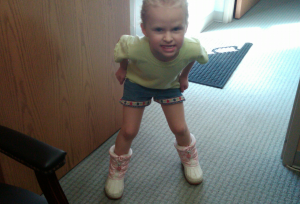 In the same way Cesar and other canine behaviorists have mastered doggy discipline, psychology aims to understand the human mind and what makes us tic.  One well-regarded psychologist, Rudolf Dreikurs, developed a model to help parents and teachers better understand child behavior.  He believed that human behavior is purposeful.  Everything we do is motivated by a need.  That makes sense.  Did you really need an eminent Austrian psychiatrist to tell you that?  Well, what Dr. Dreikurs did that was really helpful was identifying in children the basic need for love and belonging.  He found that children have four misguided goals in their attempt to get love and belonging  Understanding these four goals has helped me as a parent and as a therapist to better understand, and therefore positively change, a child’s problem behavior.

The four goals of child misbehavior are; Attention, Power, Revenge, and Display of Inadequacy.  The first two goals can be attained in either positive or negative ways, and are the most easily changed if the behavior is negative.  The last two, however, are just negative goals.  Each goal, or purpose, creates a different response in the parent.

Lets look first at attention.  When a child’s behavior is motivated by a need for attention, the parent (or teacher) will most likely feel annoyed or irritated.  This is how you can tell the child is seeking attention.  If their behavior is problematic in their attempt to get attention, instead of giving in to the annoyance you should recognize the need and then work on providing the attention in a positive way.  In the Walmart example at the beginning, the mother could have engaged her son in some conversation or asked him to help her find an item.  That would have provided him with the attention he was seeking.

The next misbehavior goal of power is one that creates the parental response of feeling angry or threatened.  The immediate impulse is to push back and show them who is boss.  If you show your anger, or if you acquiesce in defeat, you’ve just given your child the rewarding experience of a power trip.  A better response would be to recognize the need for power and find ways for them to experience power appropriately.  This can be done by giving your child choices, making a compromise with them, or helping them attain mastery in some skill.

Revenge is a behavior goal that will make the parents feel hurt or disgusted.  The child wants to get back at the parent or teacher for some perceived injustice.  The knee-jerk response is to retaliate right back.  This will just continue the revenge cycle as well as develop a disconnect in the relationship.  The solution here is to get the child to explain his or her hurt and to show you understand.  You may need to apologize.  Overall they need to hear that they matter to you.

The last, displaying inadequacy, will create a feeling of helplessness and maybe pity in the parent.  The impulse will be to take over and rescue.  This will just increase the problem.  Instead, use encouragement.   Help them see how they can succeed or overcome the obstacle.  Stay with them through the difficulty of it.  Remember, the overall need is for love and belonging and to know that they matter.

Now you know.  Your kids aren’t just misbehaving for no reason – there’s always a reason or a goal behind it.  If you can identify the purpose and the child’s need, then you have the ability to respond to them appropriately.  You can help them really change in a way that’s good for them and good for you.