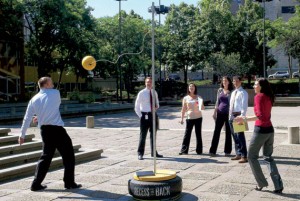 Yesterday at the office the nurses decided they needed a break.  After they stepped outside for some fresh air, they observed the leaves falling steadily from a nearby tree.  On

a whim, they decided to try and see how many leaves they could catch before they fell to the ground.  They were darting around and laughing for about 5 minutes.  Then, they came back inside and went straight to work.  I asked them about it later, and they both said that afterwards they felt mentally and physically refreshed. They were also a lot more cheerful!

This break in the daily grind made all the difference in their work day.  Their mood was lifted, mental acuity renewed, and energy level boosted.

Why should adults taking “recess” be such a novel or foreign concept?  I think its because somewhere around 7th grade in the public school system we stop scheduling recess breaks.  The message inadvertently given is that recess is only for kids.  Adults don’t act that way!  Get serious!  Stop that laughing!  “nose to the grindstone.”  It’s inhumane.  Unhuman.  We need play and free time that is unstructured.

What I’m talking about is different than a group time for calisthenics or a lunch-time walk.  That gets the physical exercise but it doesn’t get at the play we need.

Here’s a suggestion.  Take 10 minutes in the mid-morning and mid-afternoon and do something playful that includes large motor movement.  Rather than stand there eating a candy bar, go out in the parking lot and throw a frisbee.  Have an office chair race.  Play freeze tag again. Get out of the box and move!  Just 10 minutes will restore some youth and vigor.  Tony Robbins, motivational speaker and author, reminds us that the less we move, the smaller the box we require (meaning that eventually we aren’t moving at all and a coffin is all we need).  Keep moving.  Make yourself lively!  Enjoy.