Summer: Give Your Kids Some Free Time! 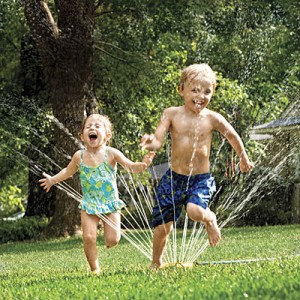 Summertime is upon us.  With summer comes a relaxing of the schedule – more time to lollygag and slow down the pace of life.  At least it used to be that way!  When I was a kid, I rode my bike all over town.  I spent days at the city pool.  Some days I was bored out of my mind, though.  Now that you’re a parent, do you see your kids lollygagging through summer the way you did as a kid?  Probably not.

There is a growing trend in middle-class America towards structured activities and programs for children; from sports programs, camps and classes to watching television and playing video games.  Studies by the University of Michigan show that over the last 30 years children’s free time (unstructured play and activity) has decreased by 12 hours a week.  At the same time, children’s involvement in programmed sports activities has doubled since the 1970s.

Why is this happening to our kids?  I think we have gotten into this pattern with the best of intentions – for the most part. We put our children in sports, music, and Tae Kwon Do so they will grow up to be well rounded and successful adults!  Good parents provide these things for their kids, right?  Before you answer that, consider these reasons as well: First, parents have become busier as the demand for both parents to work has increased.  Parents therefore need structured activities in which to keep their children occupied because nobody is home to watch them.  Second, parents are less inclined to let their children roam the neighborhood unsupervised.  Parents’ increasing paranoia about predators and child safety keeps the children indoors (and often in front of the television).  Third, parents give in to peer pressure.  In this regard, the child becomes a status symbol.  The mother and father who have created a high achieving child are seen as ambitious and successful, whereas the parent who just lets their kid “goof off” is seen as less successful, perhaps less intelligent, and possibly even negligent.  That kind of social pressure is hard to resist.

David Elkind, author of “The Hurried Child”, states that modern society is obsessed with creating the “Superkid.”  Achievement and competence have become so important that parents strive to provide their child with every opportunity to excel.  Parents are led to believe that early intellectual attainment, athletic competence, and academic achievement are essential to get into the “right” school so the child can attain the “best” career track and ultimately achieve life satisfaction.  Elkind claims that all this focus on achievement creates a competitiveness that forcefully squeezes childhood out of the child, leaving a little adult in its place. This gives a new meaning to the phrase “No Child Left Behind” doesn’t it?

In our striving to provide all that we think our child needs, we may be robbing them of one essential ingredient for success as an adult – unstructured play time.  Elkind states that hurrying our children to adulthood is likely to backfire:  “Children who are hurried as children may not understand or resent the hurrying until they become adolescent.  Then they may begin to be angry and resentful at parents for reasons the parents find hard to fathom.”  The child who is scheduled for four team sports a year from the time he was five may, as a teen, reject all of these and view the parent as manipulative and phony instead of seeing the parent as trying to instill them with competence.

Recent surveys of some of the most successful and innovative minds in the world have found they all had something in common as children.  What they all had in common was their unstructured play time!  They were given the opportunity to be bored and use their creativity and imagination to get out of that boredom.  No structured, planned, and programmed activity can provide this as well as letting your child “goof off.”

The best way to do this is make a point to not plan your child’s activities every day.  Try to allot at least three hours twice during the weekday as “free time.”  Unplug the television and telephone, shut down the computer, and turn off the stereo.   Tell them to do something constructive and then let them go.  Get out the craft supplies, building blocks, or jigsaw puzzles.  Start reading a good book. If, horror of horrors, you hear the phrase “Mom, I’m bored”,  don’t respond by structuring their life for them.  You’ve provided them with plenty of things and if they don’t like it, the responsibility is theirs now.   Let them figure it out!